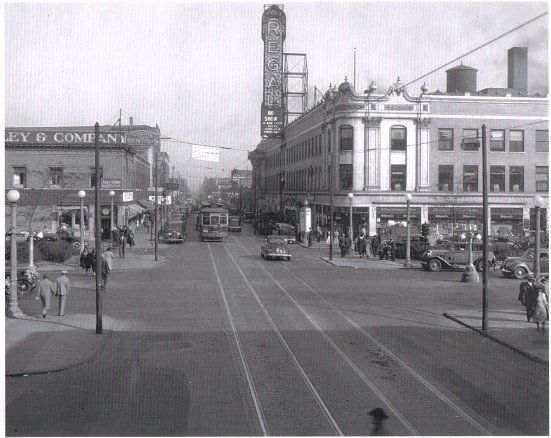 The Regal Theatre from 47th Street looking east across South Parkway (now King Drive).
Over the decades since the demolition of Chicago's legendary Regal Theatre in 1973, one of the burning questions surfacing from time to time in the theatre organ world has been “What ever happened to the Regal Barton?” One of Dan Barton’s most prized instruments had seemingly fallen off the face of the earth. Well, now we know. The mystery has been solved, and we can now expect to once again thrill audiences with the sounds of this magnificent and unique instrument!
The story of Barton Organ #222 cannot be told without first shedding some light on the equally fascinating history of the Regal Theatre. Designed by Edward Eichenbaum of the firm Levy and Klein, and costing $1.5 Million to build, the Regal Theatre opened on February 4th, 1928 under the auspices of the Lubliner and Trinz chain. Levy and Klein, which had also produced the Diversey Theatre on the North Side, and the Marboro Theatre on the West Side, designed the Regal in the “atmospheric” style, with a blend of Moorish, Spanish and Far Eastern motifs. The 2,797-seat Regal eclipsed both of its predecessors in opulence and elegance. The ceiling of the auditorium was designed to look like a huge canopy supported on the side walls by massive gilded poles and offering peeks of a vaguely Middle-Eastern landscape between the poles. In the center of the polychrome canopy was a hole with a view of a deep blue sky with clouds and stars. The large proscenium arch was created to look like an Oriental temple, decked in gold, blue, and maroon. The Regal Theatre was also equipped with a state-of-the-art ventilation system, dressing rooms, an orchestra pit, and of course, the Barton organ.
Featuring live stage acts as well as movies, the theatre proved immensely popular, and quickly became not only a fixture in the black entertainment world, but a symbol of the African-American community in Chicago. Acts such as Ray Charles, Sam Cooke, Ella Fitzgerald, The Temptations, Miles Davis, Nat “King” Cole, Duke Ellington, and many others were fixtures at the Regal. "Little" Stevie Wonder recorded his famous live version of the number-one hit single "Fingertips" at a Motown Revue there in June of 1962 that included Marvin Gaye, Smokey Robinson & The Miracles, Mary Wells, and The Marvelettes. B.B. King recorded his famous Live at the Regal album there in November of 1964.
While it is thought that the Regal was the “Chicago version” of the famed Apollo Theatre in New York, it is very possible that the Regal actually INSPIRED the Apollo and the type of entertainment offered, given the fact that the Regal had been open for six years before the Apollo opened in 1934. After the abolition of slavery, and subsequently the Civil War, there was a great migration of former slaves to the North, and with it came the need for entertainment, as well as employment. The Regal Theatre was unusual for its hiring practices when it opened, as Lubliner and Trinz staffed its flagship palace with mostly African-American management, ushers, house musicians, cashiers and attendants. Most other major Chicago theatres at the time would only hire African-Americans for janitorial and behind-the-scenes jobs. The Regal, from its inception, was staffed almost entirely by blacks, up to and including its longest-tenured and most successful manager. The Regal served an important role in the community, offering opportunities that would have otherwise been quite inaccessible. Balaban and Katz had taken control of the Lubliner and Trinz theatre chain in the 1930’s, and recruited Fess Williams and his Royal Flush Orchestra as one of the house bands. The group had been one of the opening acts at the famed Savoy Ballroom, located on the same block as the Regal, and had gained quite a following. The Savoy and the Regal provided places for families to go in the city, which proved to be a very successful business model. Together, they made this stretch of South Parkway in Bronzeville popularly known as the “Harlem of Chicago” for its important cultural and social contribution to the African-American community in Chicago.
Business boomed for the first couple of years, but the Great Depression took its toll, and after B&K acquired the theatre, they had planned to close it. However, due to massive outcry by the city’s African-American community, they elected to leave the Regal open. By the late 1930’s the Regal was as popular as ever! Motion pictures and their immensely popular live stage shows continued right up until the theatre closed.
By the late 1960’s, it was apparent that the changing condition of the neighborhood and the need for the theatre’s refurbishment were making it impossible for operations to continue. The Regal Theatre closed in 1968, and in 1971, a suspicious fire damaged major portions of the building. The Regal Theatre was razed in 1973, and the lot remained vacant until the early 2000’s. Opening in 2004, the Harold Washington Cultural Center now occupies the place where the Regal Theatre once stood.
_____________________________________________________________________________________________________


Text by Dean Rosko, with much assistance from Anita Baker Al-Shaheen. 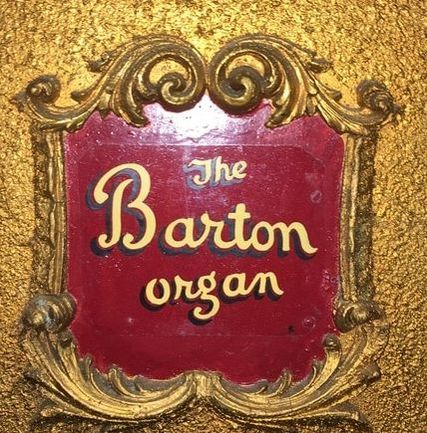